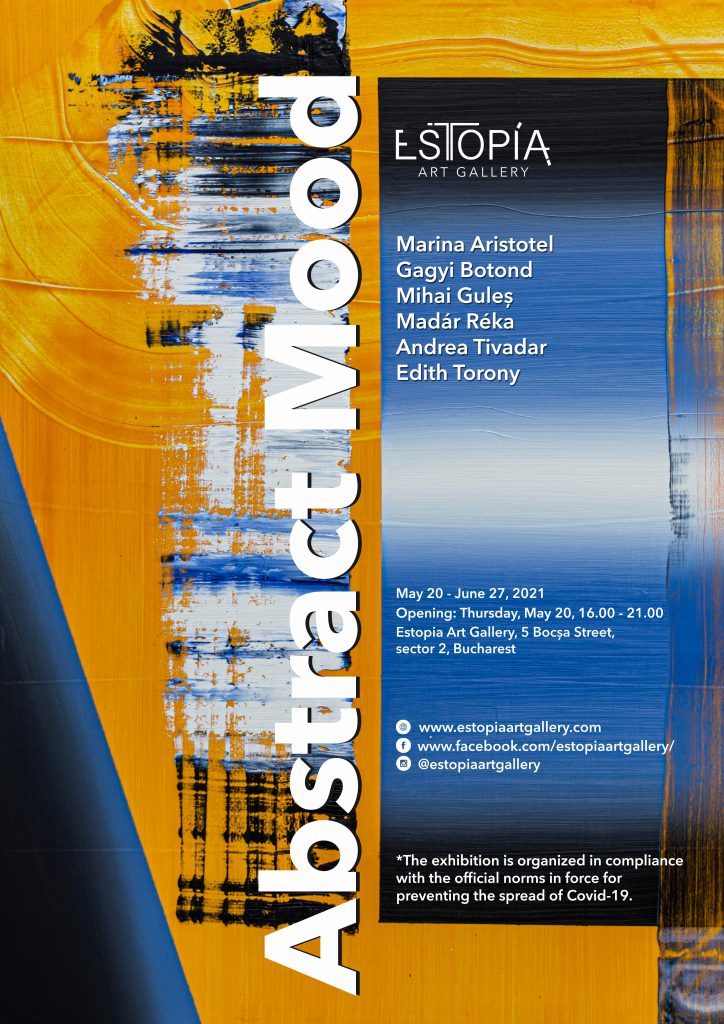 Estopia Art Gallery, Bucharest, is pleased to invite you on Thursday, May 20, from 4.00 to 9.00 PM, at the opening of the group exhibition Abstract Mood, showcasing 6 young artists from Bucharest, Cluj and Timișoara: Marina Aristotel, Gagyi Botond, Mihai Guleș, Madár Réka, Andrea Tivadar and Edith Torony.

What does abstract art mean in the vision and technique of young artists is the starting point of this exhibition, built around the concept of „abstraction of reality” and of a fluid and sensitive interference between figurative and abstract.

”In order to draw, to paint or to photograph, Eugène Ionesco wrote in the volume Black and White, speaking from his less known position of a painter, which he practised in the second half of his life, you have to know, to see, to observe. Behind the reality that is given to all of us, there is a secondary reality, a more subjective and therefore, paradoxically, a truer one. The more we make steps forward in the successive realities, the more we become realistic, which is we are true: but not in the sense of the most conventional realism, but in the sense of the truest realism”. About the representation of the “secondary reality lying behind the visible world” speak the works selected in this exhibition, and the reference to what “real” means is one of the elements that every invited artist felt the need to relate to.

For Marina Aristotel, the “abstraction of reality” is the origin itself of her creative process, which starts from the physical gesture of cutting the painted surface: beginning with this phase of destroy-and-reassemble, the artist puts order and meaning in her work. The splinter-like asperity of the works part of the series Colour Splinters, included in the exhibition, alongside the surprise of the material – plexiglass – play harmoniously with the chosen chromatic, bridging together a complete sensorial experience.

At the crossroads of figurative and abstract, Botond Gagyi offers a different perspective of dematerialization of the figurative element, turned into a sort of pale silhouette of what we conventionally call “reality”. Because reality, says Botond, is “no longer real”, and on this abstraction is focused his most recent series, Monuments of Future.

Mihai Guleș presents, on the other side, the Impossible Geometry, a series of works that explore a visual pattern built on the spatial overlapping of an „inner landscape” and of a geometric form, which has become his dominant visual pattern.

Madár Réka also is fascinated with the geometry of forms, in the series Personal Apocalypse, showcased in the exhibition, featuring a different perspective on the tension between figurative and abstract when it comes to an “essentialized representation of reality”.

Andrea Tivadar sees abstraction as a sort of “synthetic creation” by means of which unexpected representations, ethereal and transparent geometries take the place of recognizable forms from the visible world – this is, according to the artist, the way to impose “the purity and the simplicity of things”.

Edith Torony recomposes, in the series Synthetic Future, like in a magic ritual, the almost mythical landmarks of urban life, using the concrete remains of our daily consumerism. A familiar and strange image will result, at the same time known and unknown, an allegory of chaos and of contemporary unconsciousness, approached by the artist at the fragile line between figurative and abstract.

Born in 1985, Marina Aristotel lives and works in Bucharest. She graduated in Painting from the National University of Arts, Bucharest, in 2015, and earned her MA in the same field in 2017. She participated in several group shows such as, in Bucharest, Foreseeing the Present, Estopia Art Gallery, 2020; Death, LaBorna Gallery; Diploma, Palatul Știrbei, and Atelier 19&34, Visual Arts Center; Spatial Activity Studio 9, a workshop held by prof. Slawomir Brzsoska and Rafal Gorczynski, Poznan University, UNA Galeria, in 2017; and An Abstract Feeling, 418 Gallery, Bucharest, 2016, among others. Estopia Art Gallery presented her solo shows Aasamblaj, in Bucharest, in 2019, and Colour Splinters, in Lugano, in 2020. Trained as a painter and known previously mainly for her work with resin, in the past two years the artist has boldly explored beyond her own frame of reference with three-dimensional layering and assemblage technique. With Colour Splinters, Marina Aristotel surprisingly includes a new media in her art practice – plexiglass – which she masterfully turns from rigid to fluid, while emphasizing its vivid transparencies and reflection properties.

Gagyi Botond was born in 1992 in Târgu-Mureș, he lives and works in Cluj-Napoca. He earned his BA from the University of Art and Design in Cluj in 2015, his MA in 2017, and he is currently a PhD candidate at the same university. He participated with solo shows at Kunsttage Ehrenbreitstein, Theater am E’stein, Koblenz, Germany, in 2019 and 2020, he exhibited at Transylvanian Art Centre, Arcade House, Sfântu Gheorghe, in 2018, and presented his solo Splinter, at Casa Matei, Cluj, in 2017. Among his most recent group shows: Szárhegy 2020, Haáz Rezsö Museum, Odorheiu Secuiesc, 2021; Neo-Manifest Romantic, Art Museum of Cluj-Napoca and 275 Group Show, NYAFAIR – TriBeCa’s Contemporary Art Fair, New York, in 2020; Re:Start and Abstract at the Art Museum of Cluj-Napoca, in 2019. “The body is the expression of physical and emotional human experience. My paintings are not about a false representation of reality, but rather the concealing of the notion that reality is no longer real. It is important to keep in mind that these illusionary worlds have their bases in reality, seem inexhaustibly rich, but they represent a world lacking space and dimensions. The Monument of Future, my most recent series, is focused on this particular abstraction. In this way, the figures from this series, taken out from their context, by the very fact of finding themselves in a new proximity, recall the artificial relations and their abstract nature”.

Mihai Guleș was born in 1993 in Cluj-Napoca, where he lives and works. He graduated in Painting from the University of Art and Design in Cluj, where he earned his BA in 2015 and his MA in 2017. He is currently a PhD candidate at the same university. He presented his works in solo shows such as Refresh 15, Paul Sima Gallery, in 2018; Torso, as part of Expomaraton, 2016, where he won the Public’s Prize, and Craus and Pfanor, at Expomaraton, in 2014. Neo-manifest Romantic, Art Museum of Cluj-Napoca, L’Art s’invite dans l’industrie 2.0, Uzinaj / Energom, 2020; Winter Salon UAP, the exhibitions Re:Start and Abstract at the Art Museum of Cluj-Napoca, 2019; Sottobosco, Art Museum of Cluj-Napoca and Countermonument, Triade Foundation, Timișoara, Open Studio, Casa Matei, in 2018, are just some of the group shows he took part in the past few years. “The selected works are part of the Impossible Geometry series, based on the representation of the impossible geometric shape, in an abstract pictorial frame. The gestural, colourful backgrounds represent an interior landscape over which the geometric bodies were applied, these elements became a leitmotif that I came to reproduce in the majority of my paintings”.

Born in 1981 in Miercurea – Ciuc, Madár Réka lives and works in Timișoara, Romania. She earned her BA and MA in Painting from the Faculty of Fine Arts, West University of Timișoara. She presented her works in solo shows, namely Plastic People, at Calina Gallery, Timișoara, in 2009, Vernissage, D’Ancona Budis Art Gallery in Bucharest, in 2011, Borders, Pygmalion Gallery, Timișoara, in 2012, Re-wild, MAG Gallery, Como, Italy, in 2016, and Foreseeing the Present, Estopia Art Gallery, Bucharest, 2020. She participated in the Gărâna Contemporary Art Symposium in 2020 and exhibited in group shows at Halele TIMCO, Timișoara, Atelier 030202, Bucharest, The Art Museum of Cluj-Napoca, Delta Gallery in Arad and in the art fairs St-Art in Strasbourg, France, and Art Market Budapest. Estopia Art Gallery hosted her solo show, Dissection, in 2019. If since 2010 on Réka has made herself known as a figurative painter, with a highly innovative visual approach, inspired by surrealist and hyperrealist art, with echoes from pop art, she is currently moving surprisingly towards abstract art.

Andrea Tivadar was born in 1991 in Botiz, Satu Mare, she lives and works in Satu Mare. She earned her BA and MA in Painting from the University of Art and Design in Cluj-Napoca, where she is currently preparing her PhD. She won a scholarship at Ecole Supérieure d’Art de Bretagne, Rennes, France, in 2014, at Associazione Socio-Culturale ProCultura – RoArte, Rome, in 2016, and at Erika Deák Gallery, Budapest, in 2017. She participated in group shows, among which The Existential Space of Virtuality, Erika Deák Gallery, Budapest, Tra segno e colore, Accademia di Romania in Roma, Do It Yourself, Gara Mică Cultural Space, Cluj-Napoca, in 2016; The New Inmate, Centrul de Interes, Cluj-Napoca, Breaking Rules, Museum of Art, Cluj-Napoca, in 2017; Meanwhile in Painting, Budapest Galéria, The Image in Painting. About Coming Out in Reality, Quadro Gallery, Cluj-Napoca, in 2018, Foreseeing the Present, Estopia Art Gallery, Bucharest, 2020; Inside / Outside, UAP Satu Mare and Centrul Cultural G. M. Zamfirescu, Satu Mare, 2021. In 2019 Estopia Art Gallery hosted her solo show, Abstract Fluidity. While replacing figurative approach with a form of “synthetized creation” and abstraction of reality, Andrea is convinced that “art is the sincerest expression of real life”. In a fascinating play of forms and volumes, she seems to recover on her canvases an essentialized reinterpretation of an imagined reality of her own.

Edith Torony was born in 1988 in Timișoara, where she lives and works. She graduated in Painting from the Faculty of Arts and Design, West University of Timișoara. She earned her MA in the same field from the same institution in 2012. She is a member of the Romanian Union of Artists, Timisoara branch, since 2011. She has presented her works in solo shows such as Hybrid Playground, Estopia Art Gallery, Bucharest, 2019; Personal Mythologies, Forma Gallery, Deva, 2019; The Waste Land, Pygmalion Gallery, Timișoara, Junkyard Symphony, Senso Gallery, Bucharest, in 2018; Playing Emptiness, Zid Gallery, Timișoara, in 2016. She has participated in numerous group shows at Triade Gallery and Helios Gallery in Timișoara; Museum of Art, Arad; Art Museum of Cluj-Napoca; European Parliament, Brussels; Marzia Frozen Gallery, Berlin etc. She participated at the Symposium of Contemporary Art in Gărâna in 2020. She has won the first prize for Painting at the Meeting Point International Biennial in Arad in 2017. While experimenting at the crossroads between abstract and figurative painting, Edith Torony undertakes a journey in the bizarre universe of urban periphery, in the attempt to allegorically recompose the devastating effects of junk invasion and consumerism on our living space.

*The exhibition is organized in accordance to the official norms in force for the prevention of the spread of Covid-19.

Sundays & Mondays: By appointment only.

Any cookies that may not be particularly necessary for the website to function and is used specifically to collect user personal data via analytics, ads, other embedded contents are termed as non-necessary cookies. It is mandatory to procure user consent prior to running these cookies on your website.