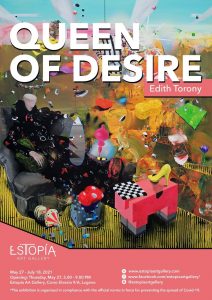 Showcasing a new series created entirely during the pandemic, the exhibition unfolds around desire as main concept, while inviting the viewer to take an unsettling journey around some of the most recognizable patterns that form the landmarks of our post-industrial contemporary society.

An entropic temptation of explosion is the hidden engine of Edith Torony’s paintings, animated by a sense of motion and speed that seems to have migrated there from the frenzy of how our lives looked like until one year ago.

The starting point of Edith’s artistic investigation is urban imagery, understood in terms of a conglomerate of what defines our consumerist behaviour. But what if our world would be peopled exclusively with the remains of what we consume and then leave away? What if the packaging of our insatiable impulse to devour and then throw away would start telling its own story?

Surreal, both familiar and bizarre, Edith Torony’s paintings show the immediate aftermath of an almost apocalyptic party, where guests just left and the rests of their cosmic hunger and desire are still floating around in a chaotic dance.

With rare exceptions, characters are almost always missing from the main scene depicted in Torony’s works: objects are at the forefront of the scene, and yet the impact of human absence is as strong as it were visible. When a human form can be noticed, as it is the case with Queen of Desire, it is that of a mannequin, as if artificiality would have turned to be the new communication and dressing code. Synthetic Future, Paradise Circus, Battleground of Desire, Cosmic Junk Food – the titles of the works speak for themselves when it comes to understanding what lies behind the objectual congestion so characteristic of Edith’s paintings.

With some surrealist and pop art references and soft inserts that recall comic art, and definitely with a strong and sharp personal style, Edith Torony has all the premises to add a new perspective on the visual depiction of today’s consumerist patterns.

Edith Torony was born in 1988 in Timișoara, Romania, where she lives and works.

She graduated in Painting from the Faculty of Arts and Design, West University of Timișoara. She earned her MA in the same field from the same institution in 2012. She is a member of the Romanian Union of Artists, Timisoara branch, since 2011. She has presented her works in solo shows such as Hybrid Playground, Estopia Art Gallery, Bucharest, 2019; Personal Mythologies, Forma Gallery, Deva, 2019; The Waste Land, Pygmalion Gallery, Timișoara, Junkyard Symphony, Senso Gallery, Bucharest, in 2018; Playing Emptiness, Zid Gallery, Timișoara, in 2016, among others. She has participated in numerous group shows at Triade Gallery and Helios Gallery in Timișoara; Museum of Art, Arad; Art Museum of Cluj-Napoca, in Romania; the European Parliament, Brussels; Marzia Frozen Gallery, Berlin etc. She participated at the International Symposium of Contemporary Art in Gărâna, Romania, in 2020. She has won the first prize for Painting at the Meeting Point International Biennial in Arad, Romania, in 2017. While experimenting at the crossroads between abstract and figurative painting, Edith Torony undertakes a journey in the bizarre universe of urban periphery, in the attempt to allegorically recompose the devastating effects of junk invasion and consumerism on our living space.

*The exhibition is organized in compliance with the official norms in force for the prevention of the spread of Covid-19.

Any cookies that may not be particularly necessary for the website to function and is used specifically to collect user personal data via analytics, ads, other embedded contents are termed as non-necessary cookies. It is mandatory to procure user consent prior to running these cookies on your website.